Spending St. Patrick’s Day in Ireland was one of those things on my bucket list I really wanted to check off. We had that opportunity in March of 2018 when we did a week-long vacation across Europe. We ended our time in Dublin with our last full day celebrating St. Patrick’s Day.

Here is what we did:

We woke up early on the 17th, grabbed a quick breakfast near our Airbnb, and made our way to the St. Patrick’s Day parade near the Dublin city center. I believe we arrived about an hour or so before the parade started. We stood on the front row and had a great view the entire time! I will say this, it was really cold so make sure you dress accordingly because you will be standing outside for a long time. I wore three jackets and was still cold.

Lunch at the Brazen Head

After the parade, we made our way through the Temple Bar area to lunch at Ireland’s oldest pub, the Brazen Head built-in 1198 where we had lunch with strangers because it was very crowded and enjoy overpriced fish and chips.

On this particular St. Patty’s Day, Ireland was playing England in the Six Nations Rugby tournament. Ireland had already won the tournament, but had the opportunity to pummel England on St. Patty’s Day in England so all the locals were excited to watch Ireland assert their dominance over England. We watched the first half at the Brazen Head and then made our way to another local watering hole to watch the second half.

Ended the evening at the packed McSorley’s Pub in Ranelagh.

After the game, we moseyed our way back towards our Airbnb and stopped at one of the nicest pubs in Ranelagh, McSorley’s. The place was packed with locals and tourists all soaking in the last few hours of St. Patty’s Day and an Irish win over England. I had one last pint of Guinness, we enjoyed conversation with some locals, and then we tucked in for the night so we could catch our early flight back to Dallas in the morning.

What should I expect on St. Patrick’s Day in Dublin?

One question people asked us over and over again was “How crazy do the Irish get on St. Patrick’s Day?” The answer in our experience: not that crazy. Were people drinking? Oh yeah. Were people drinking excessively? Probably, but we weren’t really in the crowds where that was going on. To be honest, I think the people who were going the craziest were probably Americans visiting, not the Irish.

There were a ton of people all over the city. It was pretty fun and there were a lot of folks wearing green. Most pubs and restaurants around the parade route were packed and there were waits everywhere. However, as the evening went on it seemed to get calmer. Please note: we did not spend much time in the Temple Bar area. I’m sure this place was CRAZY all day and into the night. 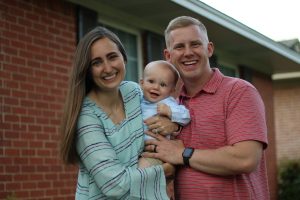 The Spell family is made up of Mallory, Graham, & Owen Spell. We have traveled to eight countries, love finding great products, and sharing about our lives. Subscribe to get our latest updates.